Right from childhood, we are always advised to pursue one dream, one ambition, all in one direction. We are told to focus and channel all our energies into doing what we want to do most (keeping in the mind the respectability factor, of course), but it is only with time that we individually realise that all those advise over the years ultimately fell flat. As humans, change is the only constant characteristic we have, be it how we want to look like, or what we want to become, nothing is for life. Unlike our tattoos.

Recently, I met up with one of India’s finest realistic tattoo artists, Rahul Ghare (of The Art Studio, Mumbai). We chatted for hours as we generally do whenever we catch up, but more importantly, what I could really take back from the conversation was a more evolved idea of tattoos. Rahul is our Artist of the Week, and through this article and the following video, we will try to give you a slight insight into the world of this mad genius.

The first thing that really strikes you about Rahul when you meet him for the first time is his physique. For a tattoo artist, he is quite big, and at the same time, very polished. In fact, during the course of the interview, he tells us, “Body building was my first passion. Then came art.” But after he took up tattooing professionally, he could barely take time out for the body anymore.

In fact, Rahul is a BA graduate, whose entry into the world of tattooing is a story of its own. Alike most artists you come across, he has had an instinct for drawing and sketching right from his childhood, but unlike most of them, artistry was never his first choice. Having got his first tattoo from Sameer Patange in 2001, Rahul didn’t give tattooing a professionally serious thought until 2010. 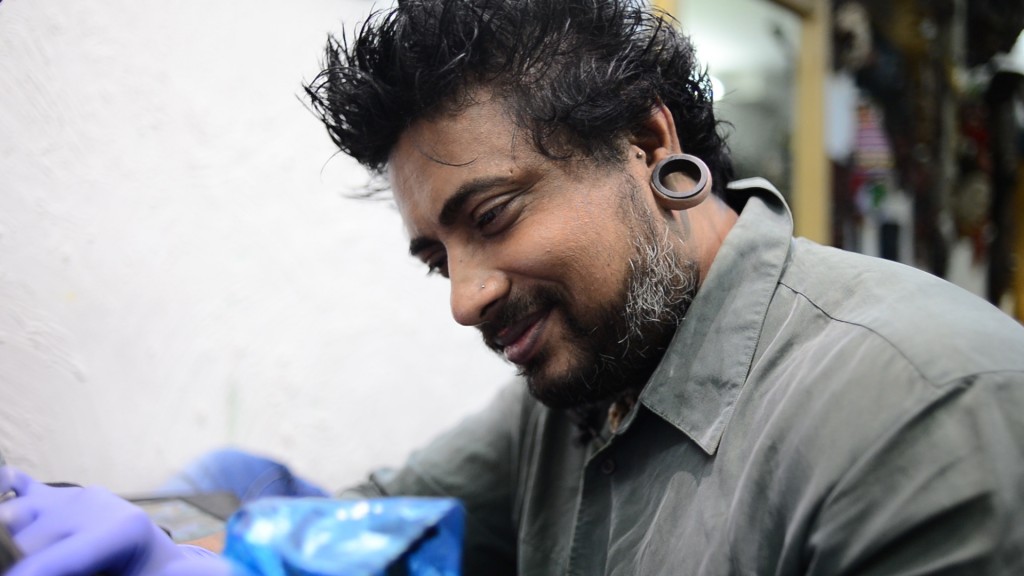 Rahul worked as a bouncer in the hippest clubs of Bombay and Pune, as a chef, and also as a call center night crawler. “Growing up in the call center culture, I was always fascinated by tattoos,” he recalls. But the artistic inspiration goes further long back. “My first inspiration in art is my uncle – he is the first artist I saw during my formative years, and remains my biggest inspiration.”

So, it was in 2010 that Rahul gave tattooing a serious thought. He gave up his blue collar job, and picked up a machine that gave him the buzz. “After leaving my job, I went to Sameer, and worked as an apprentice at his Pune studio for about a year. That is where I got to understand all the nitty-gritty of the technical aspects of tattooing.”

Rahul is also a HUUUGEE toy collector!! His collection of toys is as vast as having a library of books, or a store of CDs. You will need to book him for at least a full sleeve to able to actually make a count of how many action figures he has, only in his studio. And, it is when you talk to him about his collection and his fascination for comic characters, that you realise his love for Batman and how that intertwines with his vision of tattooing as well. “From the time I started tattooing, I have always been drawing faces and expressions more than anything else, because I believe tattoos need to tell a story, and cannot just be a piece of art. My tattoos are always a sketch of the person’s life in the way I visualise it.”

“So, when a client walks in, I tell them do not show me any designs. Just talk to me. Tell me why you want this tattoo. And then I draw something out based on what I know about them.” He also stresses hard on why people should research more about the artist that they want to get tattooed from, and not just existing imagery on the internet. “If you go by just an image, you like it today, but you might not like it tomorrow.”

Rahul holds forth this notion with respect to tattoo artists as well. When I quip him about what advise he might have for younger artists coming into the art form, his answer is straight and simple, “Just draw and sketch. Learn to draw and sketch anything and everything from the perspective of tattoos.”

As Rahul says, tattoos have to leave you with an emotion, or a ray of emotions. And that’s why, “Never rush into a piece. Take your time.” Your tattoo will last the distance with you. Give it the time it will give you back.