Popular American actor, former WWF/WWE champion and retired professional wrestler, Dwayne Johnson a.k.a The Rock is upto some mischief and this time he’s gotten world renowned tattoo artist, Nikko Hurtdao of the Black Anchor Tattoo Collective, California involved. Anybody who’s been a fan of The Rock, should remember his signature bull tattoo on his upper right arm. He’s had that tattoo for over 2 decades and it was time for a touch up. “I got this tattoo when I was just a kid. Now I need it to reflect me as a man” said The Rock on his Instagram about redoing the bull tattoo which he prefers calling ‘the evolution of the bull’. 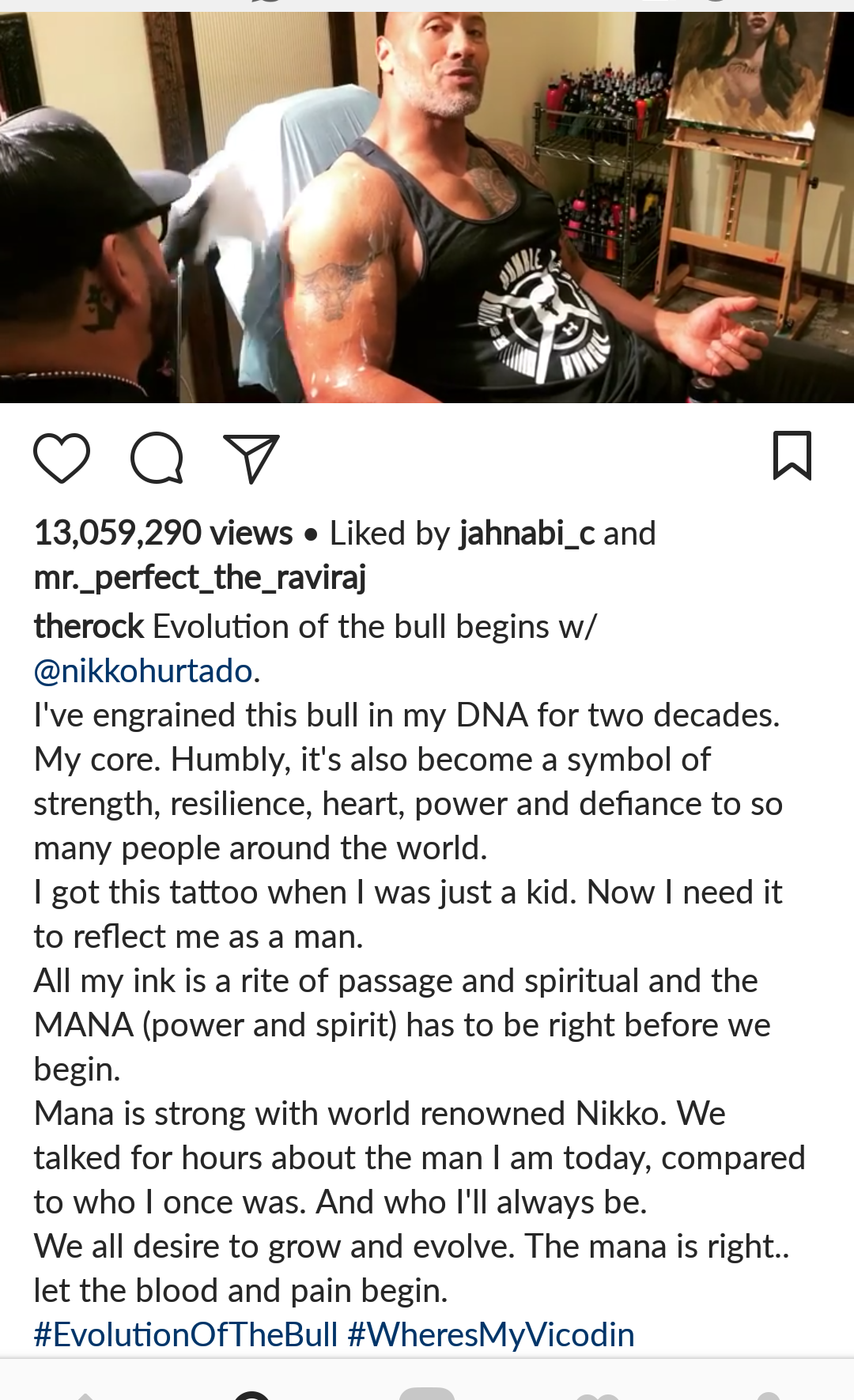 The bull tattoo has a reference to his old nickname ‘The Brahma Bull’, and has also been a symbol of strength and resilience for his fans around the world. Everybody who’s watched WWF or WWE or played trump cards in their childhood just know the bull tattoo on The Rock. His extensive Polynesian tribal chest tattoo extending to his left upper arm and finishing off as a half sleeve has garnered eye balls from the press, media and ink lovers from around the world. He has elaborative stories behind each element of this massive tattoo which holistically tie down to his family, his Black Nova Scotian and Samoan family history and heritage and his forever warrior spirit.

He has a whole ritual before he gets inked. He talks to his artist for hours and has to be sure that his artist is in sync with his spirit before they begin. Dwayne is extremely spiritual and he believes that all his ink work so far is a rite of passage. He has to feel a strong ‘MANA’ ie. an impersonal supernatural power which can be transmitted or inherited as per the Polynesian, Melanesian, and Maori belief. He feels the MANA very strongly with Nikko, hence, after hours of talking to him about the man he is today in comparison to the man he once was and the man he’ll always be and in all probability after saying a prayer, he decided that Nikko was the man for his evolution of the bull tattoo.

Nikko is an internationally popular painter apart from being a kickass celebrity tattoo artist. He has been featured on numerous TV shows such as LA Ink, Tattoo Wars, Tori & Dean, and Spike TV’s Ink Master. His TV appearances drew attention from celebrities and allowed him to tattoo musicians Drake, The Game, Fred Durst, Wes Borland, Brandon Boyd, Jose Pasillas, Wale, Andrew WK, and Cheryl Cole;  athletes Carlos Boozer and Chris Cole;  actors Guillermo Diaz and Jenna Jameson and celebrities Jeffree Star, Jesse James, and Kat Von D. He started tattooing in 2002 and now owns and operates Black Anchor Collective which has 2 branches (one in Hesperia, CA, between Los Angeles and Las Vegas- which is where the Rock is getting his evolution of the bull tattoo from and another one in the heart of Hollywood, Melrose Avenue in Los Angeles).

Anybody who has checked out Nikko’s work will know that he is nothing but pure genius and the master of realism tattoos. This basically means that Dwayne is in for some serious pain! Now, we know that the man is super strong and very tough and some crazy fans might even believe that he feels no pain. However, when you are 6 ft. 5 inches of pure muscle, each needle hole stings your skin like you’re digging flesh out of it. When getting inked, pain is most tolerable on areas with fat underneath the skin and he is pretty much all muscle. So the evolution of the bull tattoo is not going to be easy for him. This explains the hashtag in his instagram post- ‘#WheresMyVicodin’.