“My head is definitely the most painful tattoo I’ve ever had. To put it in perspective I’ll normally sit 6 – 9 hours a session. On my head I was done after 45 minutes.”

Meeting Eric Emery last December during the Skyharbor + Pangea India tour was super fun. He’s a cool dude to hang with, is mostly relaxed, easy going, doesn’t talk much before a show and the only thing he’ll get stressed out about is finding an empty room to go at his vocal warm up exercises, which when I heard, cracked me up a little I admit. Haha! Dressed in a casual pair of jeans, a full sleeve t-shirt and a skull cap, he sat on a couch scrolling through his phone and all I could think of was when and how could I get a quick peek at the breathtaking ink work that lies underneath. Eric has a sharp personality and he’d look absolutely stunning in just that incredible body suit he carries with such great sophistication! He’s so soft spoken and courteous, you wouldn’t guess what a rockstar he really is. A grammy-nominated recording engineer, producer and mixer, he sat there on a couch, sipping on his water, checking out random Indian women on Tinder and patiently waiting for soundcheck to begin!

It felt almost unreal to see the guy do the regular things we see every day. I’m sure by now you’ve figured that I was fangirling really hard since I’d personally been a Skyharbor fan since their debut album ‘Blinding White Noise’ in 2012, though Eric only joined the band in 2015. I’ve been meaning to talk to Eric since I heard about Skyharbor’s not so long ago massive European tour with American metallers, Deftones. The bands played 15 monstrous shows together in April 2017 to promote Deftones’ new album ‘Gore’, and I remember thinking to myself, this is as big as it gets! “Getting a chance to tour with a legendary band such as Deftones was pretty surreal. I had never seen them in concert prior to touring with them, and hearing Chino’s actual voice in real life is pretty amazing. When you listen to their records, his voice has this ethereal almost artificial quality, and to see that voice actually coming out of a human was pretty fascinating. My favorite gig on the tour was definitely the first Paris show. Every time I get a chance to play in Paris I can’t help but notice that the fans are so welcoming and passionate. It was great to play to such a receptive crowd. Especially because on this particular tour not many people were familiar with our music.” said Eric about the tour.

Eric started playing the guitar when he was 8 years old. The guitar was really his first musical passion and he hadn’t considered singing until he was about 18 years old. Today Eric is on vocal duties for the incredible Skyharbor and famous Youtube drummer ‘Meytal Cohen’. He also owns and operates Emery Recording Studios in Cleveland, OH and has worked with some cool bands like Periphery and Starset. He loves India and claims that Indian food is his favorite, “I love sauce and spicy food so it’s as if someone manufactured the perfect cuisine just for me. I am even proud to say that it seems as though I have a higher spice tolerance than some of my Indian bandmates.” chuckled Eric. Good for him, Skyharbor will be coming back to India very soon to play at the Bacardi NH7 Weekender in Meghalaya. (27th – 28th Oct 2017).

You’ll be pretty surprised to know that Eric isn’t really a prog head. In fact, he didn’t really listen to prog rock or metal music until he actually joined Skyharbor. I also received a bunch of fan questions for Eric and I decided to ask him a few cool ones from the list. Kalidas Shenoy of OML wanted to know Skyharbor’s songwriting procedure. Eric explained that it’s a collaborative process. “We have a dropbox folder online full of initial ideas that any of us can expand whenever inspiration strikes. There have been times when I just uploaded an acapella vocal melody and Keshav will write a whole song around that. Most times one of the guys will upload some sort of musical idea and I’ll come up with melodies and then sort of fill in the lyrics around the vocal scat parts. If you heard a vocal demo of mine before the vocals are officially recorded you would think I was a crazy person.”

Apart from being a ridiculously cool rockstar, Eric is also a serious tattoo collector. His biomechanical inkwork is one of a kind. He got a black and grey body suit which he later converted into color. This essentially means that he redid his whole body suit to fill color. In the process, he resorted to laser therapy over some parts of his body to remove old tattoos which he later redid with fresh designs. Now that’s some level of crazy you don’t get to see every day! If you’re wondering about laser removal of tattoos, yep, it’s absolutely brutal and he says that it’s probably the worst pain he’s ever felt. However, he is happy that he did it and would recommend it to anyone who wants something removed and has an appetite for endurance. A regular face at tattoo conventions in Ohio, Eric has collected tattoos from some of the most well-known artists around the world like Paul Acker, Mike Cole, Dan Hazelton, Mike Devries, Adam France, and Kore Flatmo.

His fascination with bio-mech designs is not at all subtle. “In my opinion, biomech is the most in-depth and aesthetically pleasing style of tattooing. It contours to your body in a way that no other style can and serves to augment the natural curvatures and angles of the human form. Also, it’s incredibly detailed and only the most talented artists can even pull it off.” Out of curiosity, I asked him which was the most painful tattoo ever for him and he responded with pretty much what you think it’s going to be, “My head is definitely the most painful tattoo I’ve ever had. To put it in perspective, I’ll normally sit 6 – 9 hours a session. On my head I was done after 45 minutes. It was pretty brutal. However, my favorite tattoo is probably my biomech throat piece done by the legendary Mike Cole.” 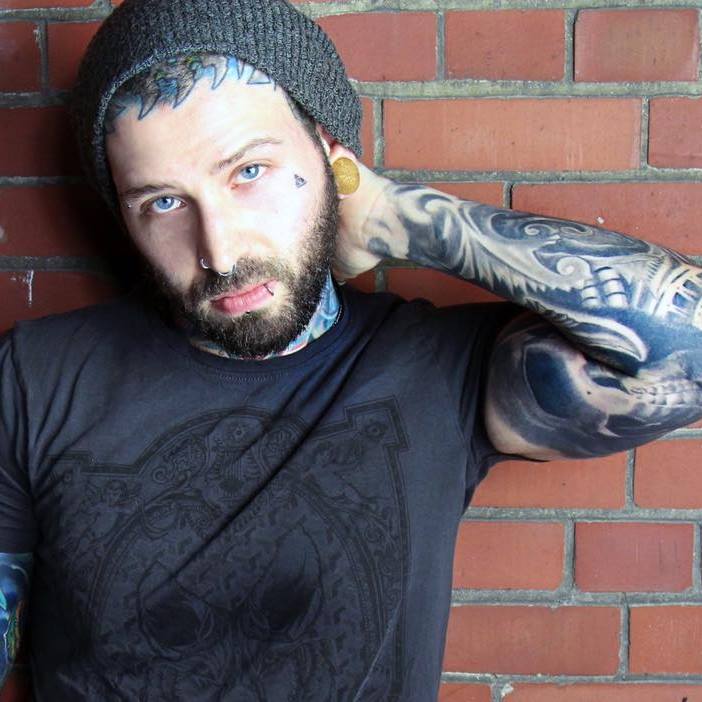 It’s fantastic news that we are having Skyharbor back in India soon. Log on to Insider.in for NH7 Weekender tickets in Meghalaya to catch Skyharbor live between 27th – 28th October 2017 and keep your fingers crossed for a full-fledged India tour right after. My sources have it that a full tour is definitely on the cards and dates and cities will be announced very soon, thanks to the good folks at Mixtape!