When you are watching tattoo artists go about their job at a tattoo convention, you are likely to come across three types of them – 1. Who is having a great time making new friends, and discussing tattoos 2. The guy who is constantly knocking off piece after piece 3. One who dedicates the entirety of the convention to a single tattoo. 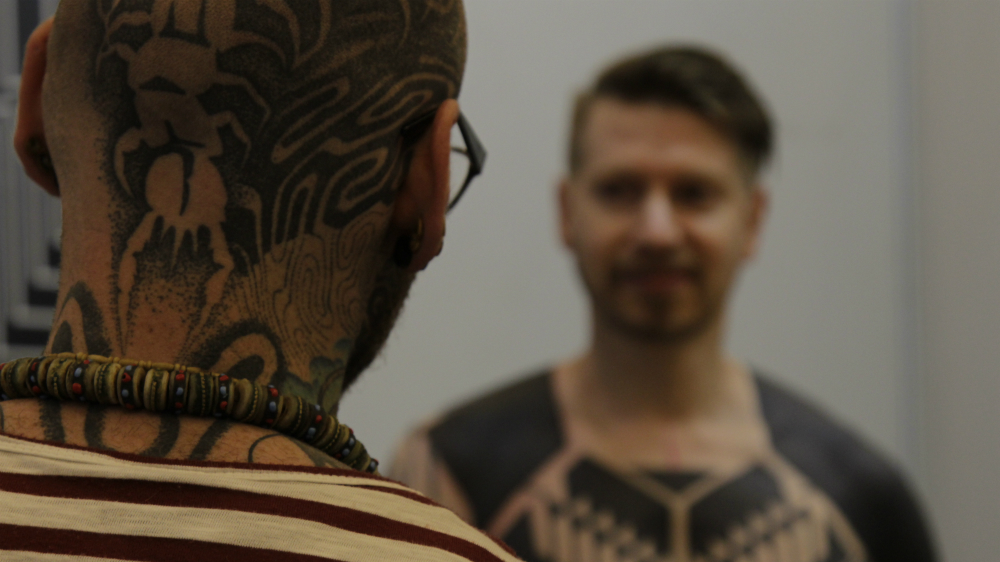 There were many of them choosing category III this time in Nepal. One such artist, who dedicated his entirety of Nepal Tattoo Convention 2017 to one tattoo was Joe Hill, aka Inky Joe, from the UK. He started this wonderful full back ornamental blackwork/geometric tattoo on his friend, Laura Shah on Day 1 of the convention. It was only after the end of Day 3, and at the after party of the convention that I saw Laura finally standing up, walking around, and talking, because otherwise, she was this calm canvas on whose back Joe had submerged himself into. After exchanging our initial greetings on Day 1, Joe told me he would be more than happy to give me an interview, but only after he was finished with the tattoo. I was glad to oblige, and boy, wasn’t it worth the wait!

In this age of Instagram, as a tattoo journalist and as a collector, I am always looking forward to interact with these heavyweights of global tattooing, because the idea of heavyweights in tattooing is itself an internet phenomenon. Joe is a tattooing heavyweight, if you are to go by the number of Instagram followers he has. But, when you go ahead and speak to him, the first thing that strikes you is the guy’s honesty, above everything else. Our interview started off on the note of me asking him what came to him first – art or tattooing. “Art, definitely”, he replied at an instant. “Drawing was my way of expressing right since I was a child. But then, I submitted myself to the pits of drugs and alcohol, until one day when tattooing found me, and rescued me. I was sharp enough to realise what the calling was, and bought myself some tattooing stuff, practiced on a few friends, and that’s how my tattooing career started off.”

Joe couldn’t have the privilege of doing an apprenticeship from an experienced tattoo artist, and back in the day, when he started out, which was about 13-14 years ago, there was a serious lack of tattoo shops, even in the UK. But that never proved to be a deterrent for him as a tattoo artist. The first thing Joe tells you when you question him about tattooing subjects and styles is that he loves animals. “I frigging love animals. I think they are fascinating. I had always wanted to be able to do something with animals that would help me earn a good livelihood too. Now, I earn good money through tattooing, and in return, can bring animals to life, the way I want to.”

While Joe’s portfolio boasts of wonderful black and grey realism, geometric and blackwork tattoos, he is not unfamiliar with colour tattooing, as well. “During my initial days, I used to do colour tattoos as well, but then I found some serious love for black and grey. But now, I am sort of re-learning my colour techniques from the guy who apprentices with me.” I was like, “Wow, so the master becomes the student?” But to him it didn’t matter at all that he was learning from his apprentice. And speaking of colour, Joe was quick to remark that this edition of the Nepal Tattoo Convention was probably the most colourful and vibrant convention he has attended. Comparing his experiences in European conventions and this one in Nepal (which was also his first in Asia), Joe said, “The primary difference that you get to see and feel is that there is a definite sense of collective over here. You can feel the vibrations, the energy is just fantastic!” While it is understandable from our perspective as to how the scene here appears more cohesive to a European artist because it is such a saturated industry over there, but Joe’s views about the scene here and beyond doesn’t stem solely from that angle. Talking about technology and its growing impact on the art form, Joe doesn’t beat around the bush, unlike most tattoo artists I have come across. Generally when you pose the question of where does an artist find himself in this growing age of technological impact in tattooing, most tattooers just have one thing to say that a machine can’t draw. But Joe doesn’t jump the gun. “I would like to say that a machine can’t do what we can, but I don’t know.  We don’t know what they will be capable of, in future, but if every other industry is looking a future where machines are taking over, then it would be foolish and arrogant of us to think that tattooing is above it.”

Joe’s views on the evolution of the tattooed person over the years are also worth taking a note of. In our part of the world, tattoos are still not completely acceptable in the mainstream society, but things have become very accommodative over the last decade or so. Back in the 80s and 90s, tattooing was more of a form of rebellion, but now, “it is just conforming”, quips Joe. “Tattooing is now too much a part of our culture, and people treat it more as body art, or individual expressions. So, the levels of discrimination against tattooed people have definitely gone down over the years. From where I come, it is the second most tattooed city of the UK, so there’s nothing striking about a tattooed guy anymore.”

My turn for a kicking today. My boy @astonreynolds smashing my ribs like a bowl of bananas

And this evolution of the psyche of the tattooed guy goes hand in hand with how the approach to the artistry has also evolved over time. “You know, we can say a lot of shit that the newer crop of tattoo artists is in it for the ‘rockstar value’, but the truth of the matter is that they are bloody good. Like, we complain a lot about Instagram, and people’s online behavior, but again, the fact of the matter is that Instagram gives us business. We earn money from it.” And that, my dear friends, is the bottom-fucking-line.