There are many reasons to love tattoo conventions, and one of my favourites is the chance to talk to and understand tattoo artists. In this case, we are talking about one of seniors of the business. One who has seen tattooing fight many prejudices, and reach its current state, and has witnessed at commercial tattooing’s epicenter of the world. Matthew Wojciechowski, of Tattoo Paradise, Washington DC, USA. Matthew is now one of the regular attendees of the famed Nepal Tattoo Convention, and was here for the 2017 edition as well.

“Few years back, I had crossed paths with Mohan (Gurung) and Bijay (Shestha) at a tattoo convention in my hometown, Washington DC. It is then that they introduced me to the awesome Nepal Tattoo Convention, their baby. And for me, it was like my eyes were opened to a whole new Pandora’s Box.

This is my third year in Nepal, and when I came here the first time, their tattooing was fantastic, and since then it has just blown through the roof. There is a vibrant culture of tattoos here, and of course, the streets are filled with tattoo shops. Of course, the general crowd isn’t that great, but the top level here is as good as it gets.”

While Matthew’s tryst with tattoos in Nepal is a recent ball game, his tattooing journey is actually older than my age. Growing up in Houston, Texas, Matthew used to sketch and draw quite a bit, when once a famous artist from the region saw his sketches and invited Matthew to do an apprenticeship with him. Back in 1990, that was a huge opportunity for anybody who was interested in the art form. So technically, Matthew has now been tattooing for close to three decades, and 27 years to be exact.

In these 27 years, a lot has changed in tattooing, and as someone who has been witness to all of it, it was intriguing to know what Matthew thinks was the biggest game changer for tattooing. “If you notice, it was in the 90s that tattooing became more of an art form than just markings on the body. Before that, it was practiced majorly by bikers and all forms of outlaws, but came the 90s, and the scene changed. Suddenly, people with drawing abilities took up tattooing as their choice of profession. It is then that we witnessed the burst of different styles and forms.” And, it’ll be fair to say that I completely agree with Matthew, because if you notice tattooing today as well, the primary differentiator and characteristic for the art form is the fact that it is now a full-fledged art form. Different artists from different parts of the world hold different values with tattooing now. 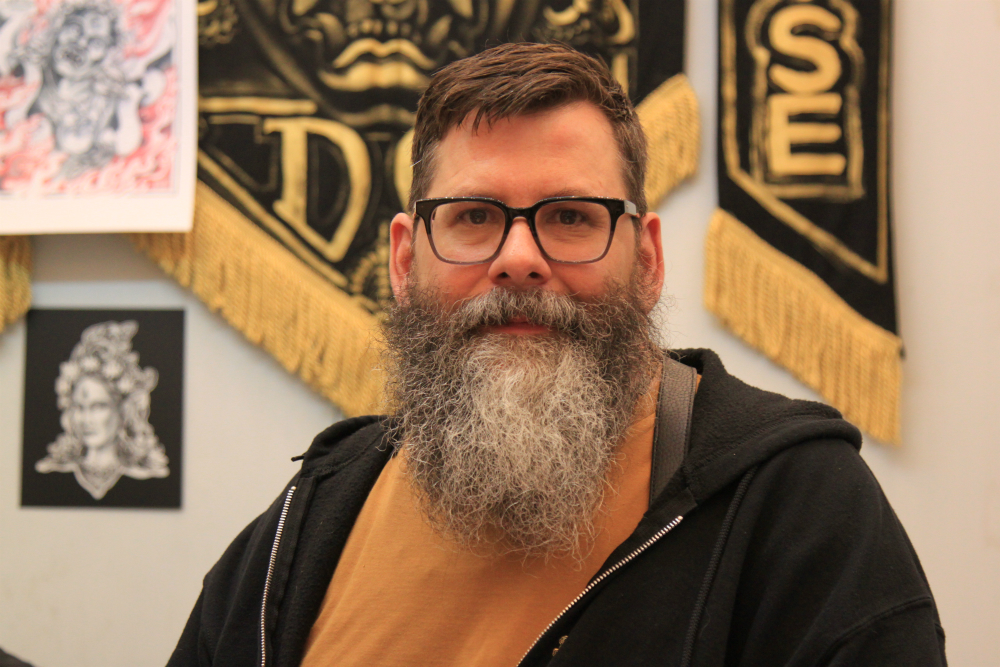 Matthew is an ol’ school tattooer, who learnt tattooing before the digital age embarked upon us, and for him, tattooing is a craft, and he believes that people who call themselves tattoo artists are being ‘too arrogant’. “If you were to find an analogy for tattooing, you are most likely to find it in works of skilled labour such as metal work, or sculpting. I believe tattooing too is skilled craftsmanship. Of course, the designing part is art, but once my design is ready, I am back to being a craftsman.”

Matthew’s work, his tattoos and his choice of imagery is a reflection of his global tastes and rich travel. He takes a lot of the flavour of South Asian traditional elements in his tattooing, whereas most ol’ school artists from America have been bred in either American traditional or Japanese traditional imagery. “I try to incorporate a lot of the elements in this part of the world into my tattooing. And, it’s not just because of their design aesthetics. If you travel to conventions in the West, and conventions in South Asia, you definitely see the stark difference in the atmosphere. People here are still enthusiastic about tattoo conventions. Out there, since we see so many conventions in a year, we don’t have this vibe…”

There are also certain personal fundamentals that Matthew likes to keep in check with his tattoos. We are often debating about the idea of tattoos, and what do tattoos mean at the end of the day, and all other questions under the sun, but he breaks it down very well for us. “Your tattoo has to be visually appealing, because it is a visual art form. Sometimes, people go too literal with their tattoos, and that leaves the person a little suffocated over time. If you have a text on your body, the other person will just read it, but if you have an image, you can then create a story around it.” That is so true because it is only after getting tattoos that you realise how it matures with your mind and conscience over time. So, being a little ambiguous with your tattoos is the right track to be on.

Matthew, a self-proclaimed craftsman, not artist, is also very clear in his ideas about what’s business, and what’s art, and their relationship. “People need to understand that tattoo trends and tattoo styles are two different things. Finger tattoos were a trend, not a style. It is shameful what a lower back tattoo trend did, because the lower back figuratively can sport beautiful tattoos, but now, there is too much of a stigma around it. When we talk of laser tattoo removals, obviously it’s not as good as an eraser, but eventually we will reach there. As a tattooer, I am clear in my head that every time it is fresh skin walking through the door, it is money for me.”

For a tattooer who has witnessed such massive change his profession over the years, and still managed to be really good at his job, I had to ask him, “If not tattoo, then what?”

He said, “Now, if I were to part ways with tattooing, I would go back to school. I want to be a scholar, ‘cause you got nothing to do. Just go to classes. Or a pizza delivery boy; that’s the only thing I am qualified to do, but no, leaving tattooing is a nightmare-ish thought. It’s too ingrained in me…”