There are many of us who are excelling in our current jobs, or whatever ventures we are into, but not always we are doing what we always wanted to do. Not always do we become what we wanted to become.

Such is the story of one of India’s premier tattoo artists, Niloy Das. Owner and artist-in-chief of Lizard’s Skin Tattoo Studio, Niloy has made a respectable name for himself and his studio in rather quick time. He is revered as the best tattoo artist in eastern parts of the country, and has played a huge role in the acceptance of tattooing as an art form in the cultural capital of the country, Kolkata.

Recently, I caught up with Niloy to understand more of the man who is also our Artist of the Week. As it turned out, we got to figure his shy nature in front of the camera, but once we tackled that, we were led to all the corners of his psyche, that helped us decode his mastery of the art form a little.

Niloy is regarded as one of the finest black and grey realism artists of India, and he has reached that status with his artistry in rather quick time. As he himself says, tattooing or drawing was never his first love. “My father used to force me to take drawing lessons.” His father was also an artist, and wanted to achieve great heights. In a way, now Niloy is living his father’s dream.

But what was his dream?

“I always wanted to be a musician, not a tattoo artist. My way was with the drums, not with a tattoo machine. But such is life. Commercial music is a very hard to place to survive in. I, as a matter of fact, started tattooing to support my band.”

Niloy’s tattooing did support his music in the initial years. When he started tattooing in 2010, he was operating in a 108 sq. ft. shop. Then, in 2012, he shifted to his current studio; a 1000 sq. ft studio. That’s when his priorities needed to change.

“After moving in to the new studio, expenses went through the roof, and that’s when I decided to give up music, and give my full time to tattooing. Such is life…” 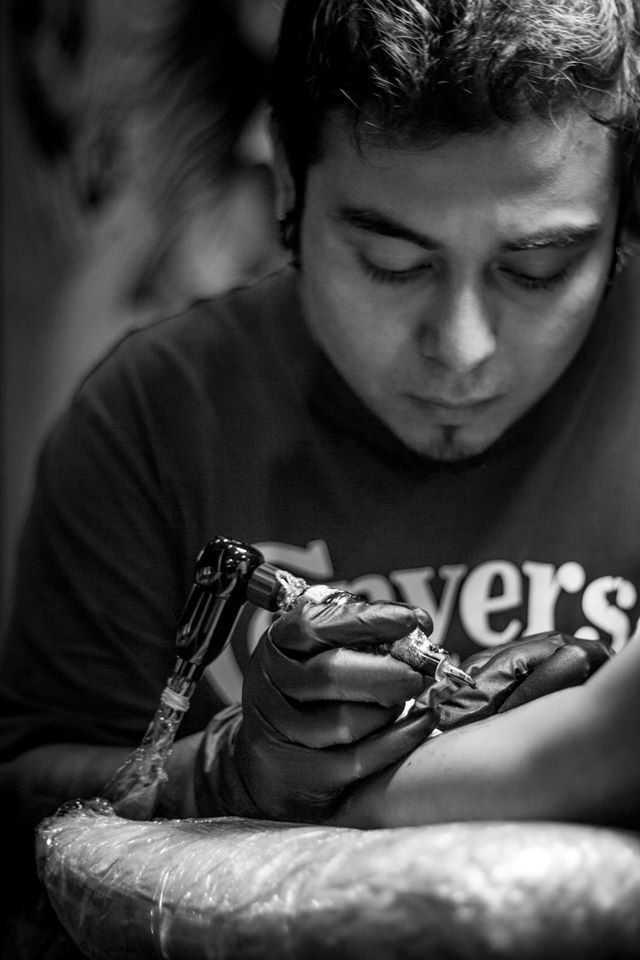 When Niloy talks about his music, you can sense that special touch of romance in the way he talks about the old times. But, that doesn’t take away one bit from what he has been able to express and achieve through his tattooing. He feels he rather ‘unfortunate’ to have not been guided by any senior tattoo artist when he was learning the ropes. But, when you walk into his studio, you can see for yourself that he has created an atmosphere that can help the younger generation not feel the same void he was plagued by.

“Growing up as a tattoo artist, I did not have anyone to guide me, really. I used to follow Manjeet Singh, Sameer Patange and Lokesh Verma on Orkut. And of course, YouTube was of great help (laughs).”

Niloy loves to do realistic tattoos, but also realises the challenge that the generally dark Indian skin tone poses for that particular style of tattooing. Talking of realistic tattoos, for Niloy, “tattooing changed in 2013, when I saw one of Dimitry Samohin’s pieces. It was a realistic colour portrait of an African woman. When I saw it, I was like WOW!”

And it is not just for his tattoos that Niloy has earned has such respect from all quarters of the community. In 2014, Niloy organised the Kolkata International Tattoo Convention, or should we say his wedding party. “In 2014, when I was getting married, I wanted to invite all other artists, but I knew it would be impossible to gather all of them together, so I thought of organising a convention in Kolkata. It was not a run of the mill convention. It was more like a gathering of tattoo artists and my friends from India and Nepal.”

The sense of community building and freedom of expression that you find in music, Niloy has incorporated the same values in his tattooing as well. “I feel tattooing is something that should come from the inside. If you feel like getting anything tattooed, you have the freedom to go for it. It is not always necessary that a tattoo must have a meaning. Sometimes, you just like an image, and if seeing that image gives you good vibes, you can get it tattooed.”