What’s the first thing that comes to your mind when I say the word “Grandma”? Amazing food? Warm hugs? Numerous gifts? While most of you may go “Yes! Yes! And Yes!” One of my friends begs to differ. When I say this word to her, she thinks of traditional tattoos and a woman with a bad-ass attitude.

On questioning her thoughts, she introduced me to her “Avva.” Man! What a day that was. It is was like her thoughts took shape of an 84 year-old woman, who draped a simple saree and let her tattoos and ‘one-liners’ represent her. I got the first glimpse of her witty-nature when she commented on my tattoos. She looked at them and said, “Meh! Do you call those permanent tattoos? See mine! These are real tattoos, kid!” Mrs. Narayanamma was inked all the way from her forehead to her arms to even her fingers. Fingers! My brain at the time couldn’t even comprehend the pain she might have gone through when she got them. 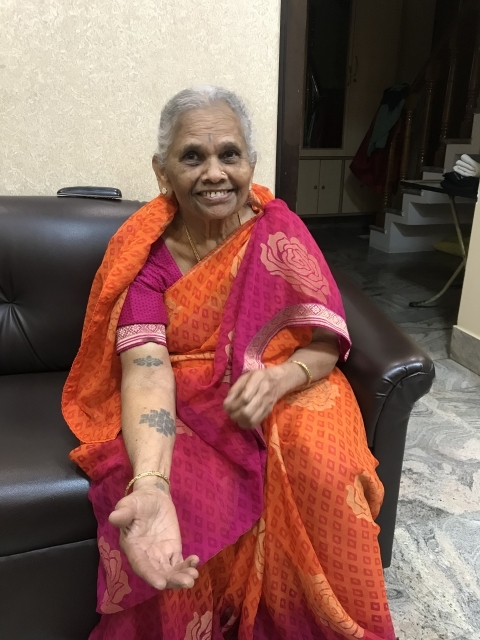 So, me being myself — the kind of person who likes to provoke an angry cat — got into a conversation with her, just to understand her comment! The answers I got made me remember a meme that went viral in the tattoo community. 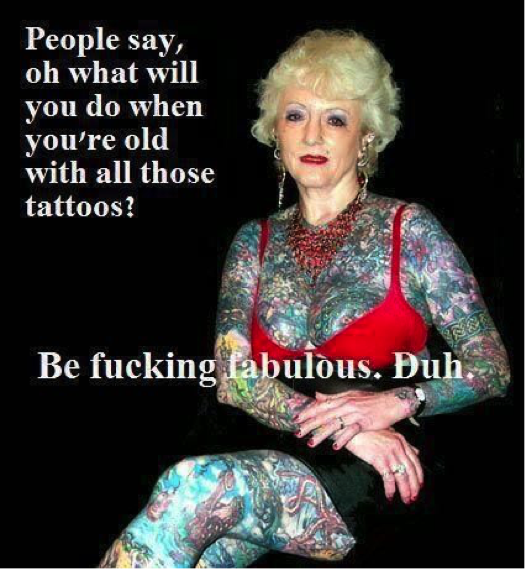 “Unlike y’all, my first tattoo wasn’t something I volunteered to get. It was a tradition in Kavetisamudra, my home town. I was a little over 10 years old when my family invited Acche or Pachakuthu artists into our home and had them tattoo me. For a girl who knew nothing about the art or its over-the-top pain, getting a forehead tattoo was in every way a bad experience. I can remember it like it was yesterday,” remembered Narayanamma. “Worst of all, it was a Bindhi like tattoo and I found the equipment and process utterly disgusting.”

I wondered why. I mean, I knew these artists were ill-equipped, but the process was fairly simple and very similar to what’s done today. Instead of a machine and processed ink, these folks used needles and dye made out of tree barks and herbs—for the most of it, at least. “Not from where I come,” she asserted. “It was done by tying up three needles together which was dipped in breast-milk — that was the ink.” 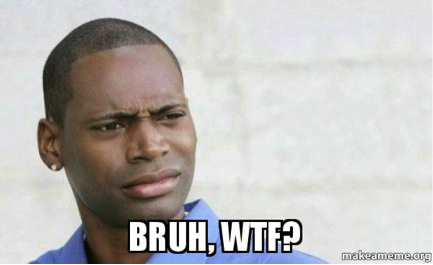 WTF! Breast milk? I don’t find anything wrong with it, but how was it so easily available and what’s the source — human or cattle?

“It was taken from lactating women in the village. As most of them were housewives, sex was more of a recreational activity than an act of love or lust. I don’t remember a single time when these ladies weren’t knocked up,” she said.

Huh! We shared a moment of silence and moved on from there. While Avva’s first experience was in every way shitty, I wondered how she ended up with other tattoos. I mean, no one would or could force a person to get their arms done, right? So, I kinda anticipated a twist to this story — and there was one.

Fast forward 20 years. After Avva got married, she settled down in Bangalore. While her husband worked, she—like many at the time—was a homemaker. It was a normal day when she was busy gossiping with her neighbour when she saw a tattoo artist in her alley. But, this time her reaction was entirely different to the idea of tattoos. She noticed that her friends went gaga and desperately wanted to get a tattoo done. And, as you might have guessed it, she fell victim to peer pressure. She tattooed her entire forearm. 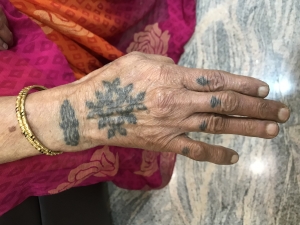 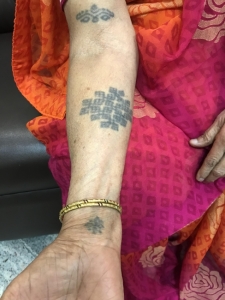 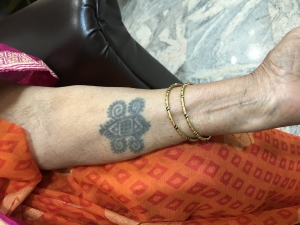 “We weren’t allowed to pick a design. We could have gotten a name written or some mythical pattern.” By the end of that day, Avva had two tattoos inspired from Ramayana at 25 paise each and got two free of charge.

Wow! The prices made me feel I was born too damn late! “I didn’t mind the pain this time. In fact, it was less than a 20 minutes session for the whole thing,” she said. “Honestly speaking, I liked it, a lot. Given the chance, I would have gotten inked many more times.”

It has been nearly 50 years since Avva’s last tattoo, but her love for them hasn’t decreased one bit. I’m pretty sure, she would have filled her entire body if she was born in our generation. “I would love to get more tattoos! Even now! Maybe not a big one, but a few small ones. If I were to advise kids your age, it would be to get smaller tattoos and turn yourself into a canvas showcasing a beautiful trip down memory lane,” she said with a wide smile. 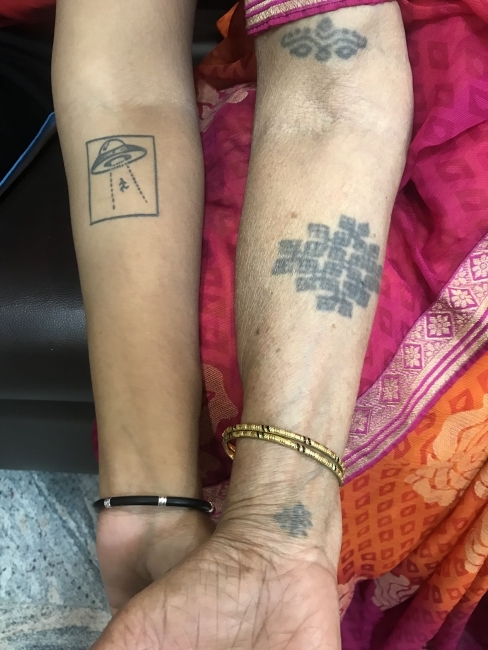 But my question remained unanswered. She never gave me an explanation concerning her comment on my tattoos. “Get a stick-n-poke tattoo, the traditional way. Survive through that and compare the experience to your modern-day tattoos. You will get your answer,” the bad-ass woman concluded and hit the sack.

Wow! In all my life, I had never imagined having such a conversation with a granny. But, I left home that night with one hope—to be as cool as her when I’m that old, to be proud of every inch of ink on my body, and carry it with a bold and beautiful attitude. Wouldn’t you want the same?