Tattooing is not only one of the most ancient art forms, but also among the first forms of language for mankind. It has evolved into modern and postmodern expressions, but is still found in almost all indigenous tribes, cultures and people globally. India is known to have one of the largest number of tribes, each with its own unique set of art, culture, tradition and social structure. And tattooing has been an integral part of it all in India as well. If you stop for a second on the street and look around, you are bound to see people with tattoos walking past and at least one person will have a traditionally or locally made motif. Be it the rickshaw puller, the driver, the bus conductor, the house help, the caretaker for your child, the woman piling bricks on her head at the construction site or your grandmother; you will definitely find fading lines on some of their arms and hands.

My work has always taken me to many small towns, cities and remote corners of the country, where many a times, language becomes an issue. Needless to say, the women from these communities are shy and largely skeptical of ‘city folk’. But I have always managed to find at least a few women in all these spaces who definitely have ink. And no matter how difficult the situation first seems, my tattoos have always been the ice breaker. The moment I spot a tattoo on a tanned arm, riddled with wrinkles and marks of a life lived hard, I immediately feel that a connection has been made. Pointing at their arm, I roll up my sleeves and there is always a glimmer of recognition and curiosity in their eyes. And then we don’t need to understand each other through words. 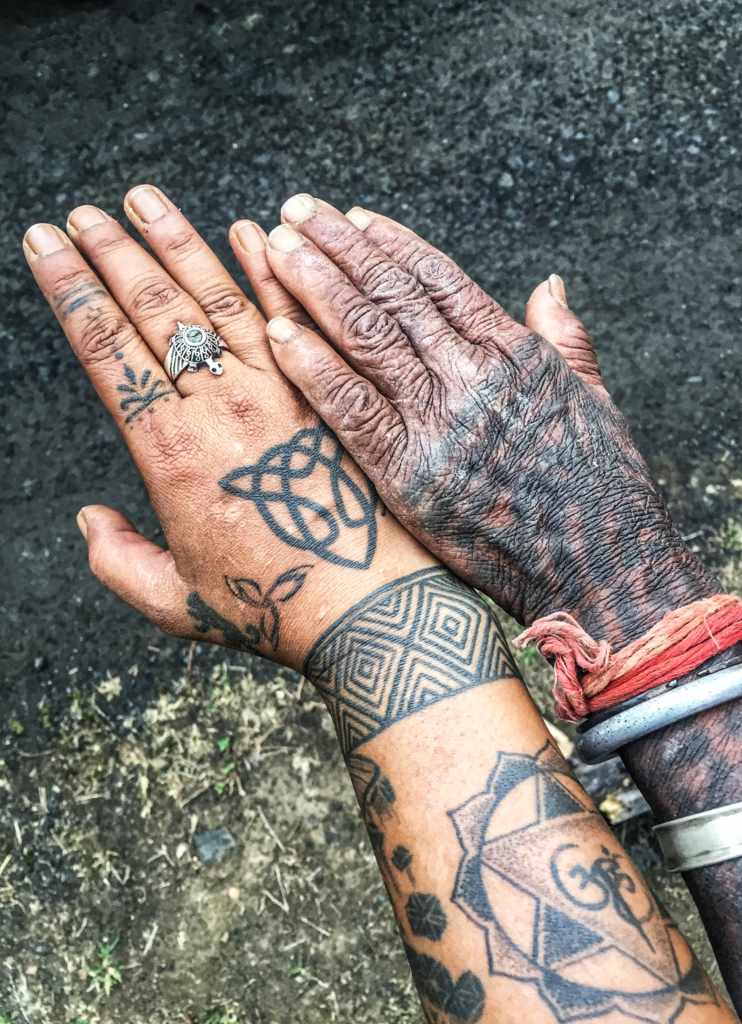 We run our fingers over the ink on each other’s hands and make gestures and grin and talk of pain of the needles in a momentarily invented sign language. There have been times where I have been surrounded by a group of women who have pulled my kurta aside, curious about the raven tattooed on my neck. Or have giggled and made a face on seeing the lizard on my shoulder. Some have tried to check if my tattoos are permanent or not by putting wet mud over them and vigorously rubbing them. Some have been shocked that I am not married but still have the audacity to have tattoos, and that too, willingly. I have collected some wonderful stories about the ink these women have and it has always pleasantly surprised me that for them, tattooing was never a ‘choice’ or a decision, but just a part of growing up!

“How will you prove it to God that you have lived on earth if you don’t carry this mark from here?”

“We are five sisters, and all of us have these five figures on our arms. That’s how we will recognize each other in the afterlife.”

“This is the Ashok Vatika where Sita Ma spent her time. This inspires me to be a devoted wife like her.”

“This was done because it is like a bangle around my wrist, but it cant break as it is permanent.”

“This is the palki on which Sita Ma had traveled. This is a mark of being married.”

“This is the Jaganath Rath. It protects me.”

Over the past few years, I have been taking photographs of my tattoos next to the tattoos of women I have met in big cities, tribal belts and villages. These images are a collection of our connected ink, which doesn’t see any divides of class, caste, creed or language.

Follow S Chak’s trails as she explores the deep rooted trails of tattooing in remote corners of India.