Getting heavily tattooed in India is a burgeoning phenomenon, but still relatively very new. People, in general, are yet to truly embrace the somewhat inexplicable expressionist qualities of tattoos, and still treat them more from a perspective of ornamental value. But as tattoos are growing my becoming a part of the Indian mainstream, more and more legit collectors are emerging out of all corners of the country. These are people who have found that ‘special connection’ with ink on skin, and have adhered to going big, instead of going home. But, the life of a serious tattoo collector in India is highly questioned in the social fabric. 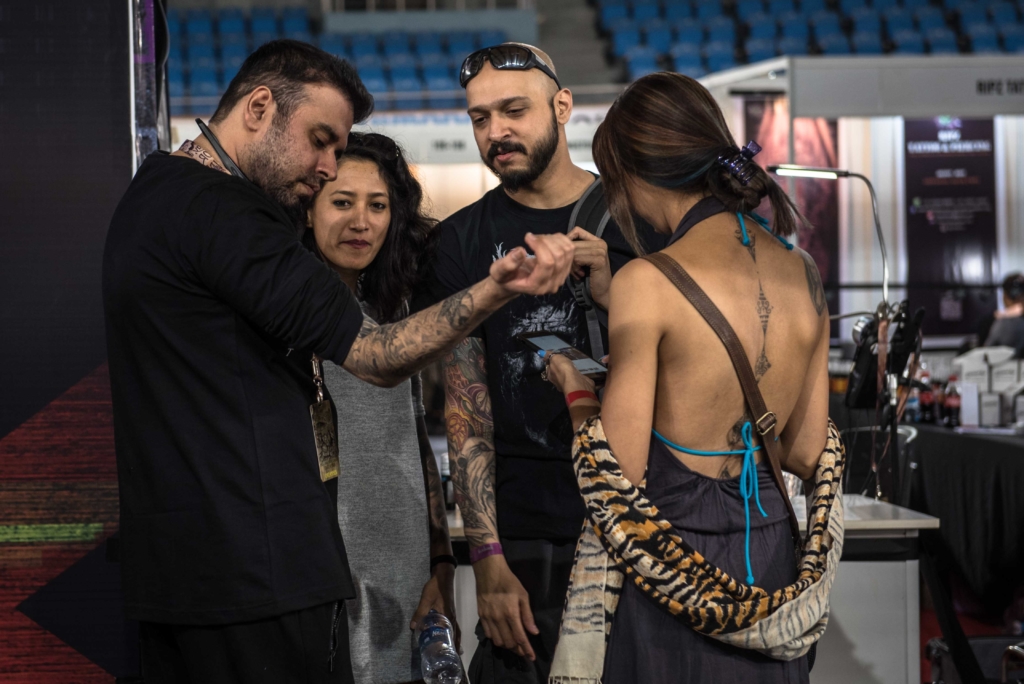 From plain amusement to passing judgments to determining professional well being, Indian tattoo collectors go through a bit, to say the least. So, we caught up with some of heavy collectors from different parts of the country, and from different walks of life to figure out what’s the real scene like. We asked the same set of six questions to all of them, and tried to see if there are patterns that are obvious and tell us a thing or two about how India perceives tattoos and what it’s like to be a heavily tattooed guy/girl in the largest democracy of the world.

These were the questions in the following order that were to the participants, along with some of their answers.
1. Are your tattoos the first thing people notice in you?

Shyam Sudhakar, a financial banker, and one of the most heavily tattooed people we know in India, when asked if tattoos are the first thing people notice in him, says, “Apart from my receding hairline, YES!”
Rishabh RD, another heavily tattooed guy from Delhi says that it’s a “resounding yes. You stand out from the crowd, whether you want to, or not.”
Selwyn Santmajor, a footballer and an ink collector from Mumbai actually puts it the best, “people usually look at my sleeves or legs first, and then my face.” In fact, all the participants in our survey said a 100% yes to their tattoos being always noticed first, even before them.
2. Do people assume you to be a tough cookie (“hardcore”) because you have sleeves?

Sonam Nath, also from Delhi, also a heavily tattooed Indian says, “I feel like I make people uncomfortable sometimes. Like they can’t have an eye contact while talking. They want to stare at my tattoos, and ask about them, but don’t have the courage. They only stare. Apart from that, I pay the same amount to the auto guy like any other girl in the city traveling by metro 🙂 nothing special.”
Ephrem Rokk, a Malaysia based animator says not really. People used to think he was a tattoo artist too, till he got his head tattooed. Then on, he has got the “hardcore” looks from people around him. Craig Peris, another collector, had a very interesting insight on this question, “No, more than hardcore, my friends and family now feel I am more pain resistant. But, even beyond that, some people upon interacting with me realise that I have gone through something significant enough to have it on me for the rest of my life.”
3. Has it ever impacted your professional life?
Craig’s answer to question was refreshing to know. He says that his tattoos haven’t impacted or affected his professional life, at all. He is from the IT industry, but believes new-age recruiters and companies are not judging merit of a person based on their appearance.
On the other hand, Narayanan Haridas, from Mumbai, says h never takes the chance, and always wear full sleeves to work. Selwyn from Mumbai, also says, “Sometimes, I have been asked to button up my sleeves before meetings to look professional (never made sense to me).”
While some find it problematic for others to ask them to cover up their arms and legs, some rather choose that on their own. Sonam says, “I prefer to keep my tattoos covered. I feel it will impact my efficiency. I work for a VC firm in the travel sector, and I have to meet a lot of vendors on a day to day level. And, I am honestly tired of answering the same questions over and over again when it comes to my tattoos.”
Rohit Sethi says, “l run my family business, so you can say I am the BOSS. But when I go for meetings wearing a t shirt, people just stare at my arms, instead of paying heed to what I’m saying.”
4. What’s the most common reaction you get to your tattoos?
Shyam, from Delhi, says, “It varies from person to person. Friends admire the art, relatives are puzzled and ask ‘why?!’. A stranger on the street is sometimes perplexed and wants to touch to see if it’s actually real.”
Rishabh believes there are two kinds of reactions he generally receives on his tattoos, “for some, it’s the coolest thing ever, and for some, it’s a taboo. Older people look at me and make weird faces, and the younger ones want ink on them too, once they see me.” Another collector Amit Das says he can put a number to it, “70% wow, 30% eww”.
One thing all the collectors seemed to agree upon during the interview was that the most common interaction they would have around their tattoos is how curious it makes people to know more about how it’s done, how much it costs and like.
5. Do you think you get treated differently in circles and groups because you have big tattooed areas?
Selwyn says, “I definitely feel like the centre of interest when a group of friends catch up.” Ephrem from Malaysia says, “around strangers, yes, they would be quiet usually and think I am some gangster. Only when they get to know me do they realise I am just and comics and gaming nerd.” Rohit Sethi likes the attention he receives because he is heavily tattooed, and says, “Most of it is inquisitiveness.” Narayanan also agrees that most of it is inquisitiveness, but he “don’t care.”

6. Do you regret any part of your tattoo or the whole of it?

Most of the collectors we spoke to had an outright, loud NO to that question. No regrets. No thinking twice about how special it is to them. Sonam from Delhi in fact says that she’s found a family in Devilz Tattooz, the studio from where she keeps getting inked. Selwyn from Mumbai also says that he did his research about the artist before finalising, and thus there’s no scope for regrets.
Tell us in comments below if you too are a collector, and if you have had similar experiences as well.
January 6, 2019January 6, 2019Shubham Nag4

PEOPLE ARE TALKING ABOUT