People with tattoos are known to have a strong sense of identity and the ink they wear becomes a part of the person they evolve to be. We have different ways of describing our individual selves and for most of us, it is a life-long quest- to find that perfect balance where we are content with who we are and who we are perceived as, by the world.

Nithu realized that she was different from kids her own age early on. Growing up in Hubli in a family with another brother and a sister, Nithu answered to the name Nithin for most of her life. It is only recently that Nithu became a reality from within Nithin.

Nithu says, “I think I was in the 7th standard when I realized that I am different from the other boys. I never liked talking about girls, or even looking at them like my other friends. I used to look at the boys and didn’t care at all about the girls around me.” At an age where adolescence begins and the first fleeting flutters happen when you have your first infatuations, Nithu, who at that time was Nithin, noticed that she never felt anything towards the opposite sex. She knew something was amiss and turned to the internet to get answers.

“Because I knew my feelings were different, I constantly questioned myself whether it was normal and natural for a boy to be like me. That confusion was always there. I needed to find an answer to that question. I didn’t talk to anyone about it either because I didn’t know what to do and kept everything inside my head, constantly analyzing. It was only when I searched online that I came to know it’s a normal thing to have feelings towards the same sex and I am like that only.”

By the time Nithu finished school, she knew that even though she was born a boy, she wasn’t heterosexual. She got in touch with more people from the LGBTQ community through online platforms and through them got introduced to an NGO which used to work with the community.

“I went to some of the meetings at the NGO and there we were given more information. They even had a doctor who explained the health hazards and made us aware about HIV. By then I had started experimenting with cross dressing and I used to perform at the events organized by the NGO,” Nithu says.

Throughout school and later in college as well, Nithu struggled with her gender identity. Even though initially Nithu thought that she was gay, through constant analysis of her own self, Nithu understood that was not the case. “I liked putting on make up and dressing up like a girl because I felt like a girl. I never used to feel attracted to a gay man, no matter how handsome he was. I was attracted only towards straight men. And that’s how I came to the conclusion that I am not gay, I am transgender and around 8 years back, I decided that I wanted to become a woman.”

And she lived a dual life for years. It was Nithin who would step out of the house and Nithu emerged only behind locked doors.

“I used to cross dress for my close friends just for fun or when I used to go out for partying. Before coming back home, I would again change into men’s clothing and then go in. But I was not comfortable with that because my feelings were different.” The discomfort that Nithu felt with the duality of her life was because she didn’t want to hide her true identity. She felt caged living two different lives, balancing her family, the outside world and her personal life. 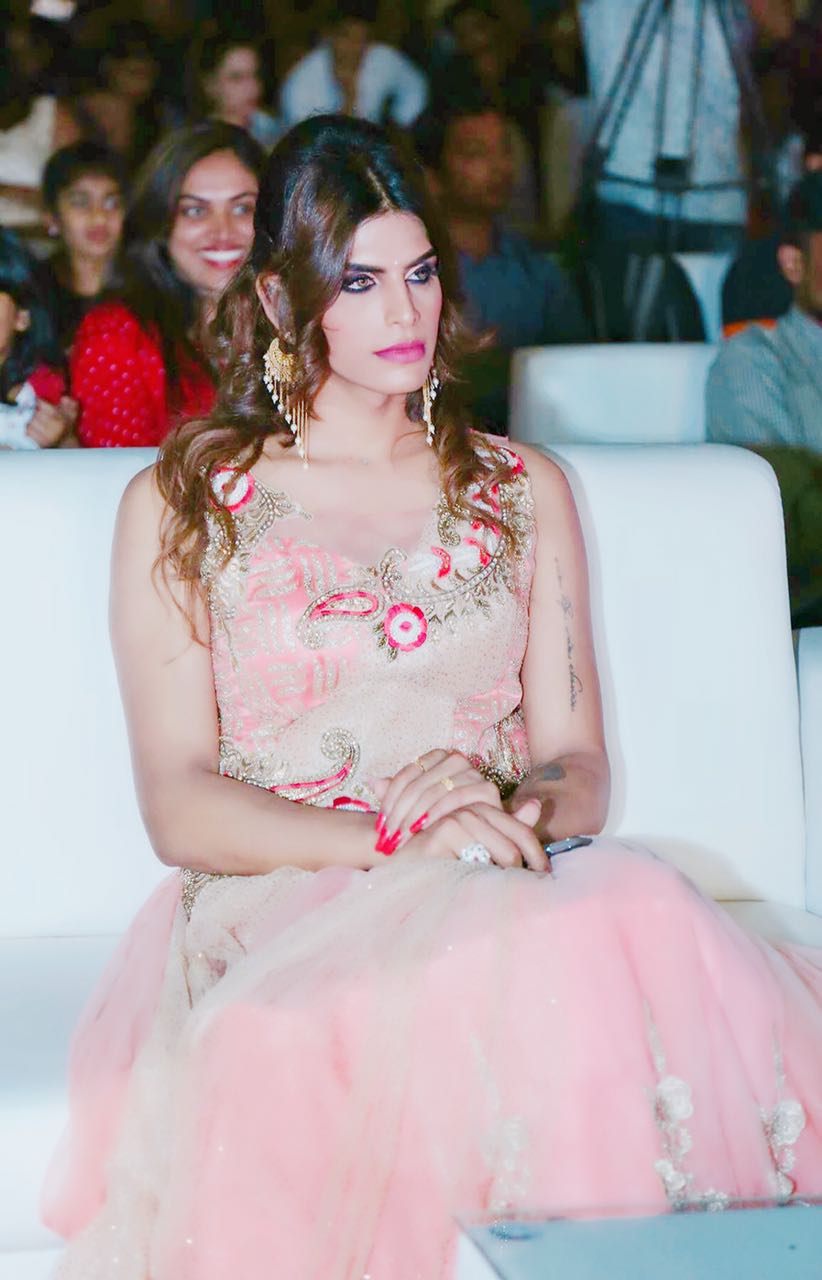 “A close friend of mine suggested that I should tell my family that I identify as a woman and not as a man. And even though I also felt the same, another question came into my mind that what’s the need to trouble my parents? Because I knew if I came out to them, they would only be upset and worry and I didn’t want to bother them at that time.”

Even though Nithu had already made the decision of becoming a woman from a man, she didn’t want to take any drastic steps to fulfill her dreams.

She decided that first she needs to be well settled in her life and cater to the responsibilities towards the family as a son. With a mind which was always bent towards business, Nithu had started an events company while in college overseeing a team of twenty workers. With this in mind she opened a restaurant for her mother and a beauty parlour, for her sister.

“My mother loves to cook and she is a great cook. I asked her if she would be interested in running a restaurant, while I took care of the finances. She agreed and I started that business. Similarly I opened a beauty parlour as well which my sister handles.” In the meantime, Nithu had started tattooing and opened 3 tattoo studios. With a keen interest in arts and crafts from a very young age, Nithu studied animation and fine arts which then evolved into her becoming a tattoo artist. 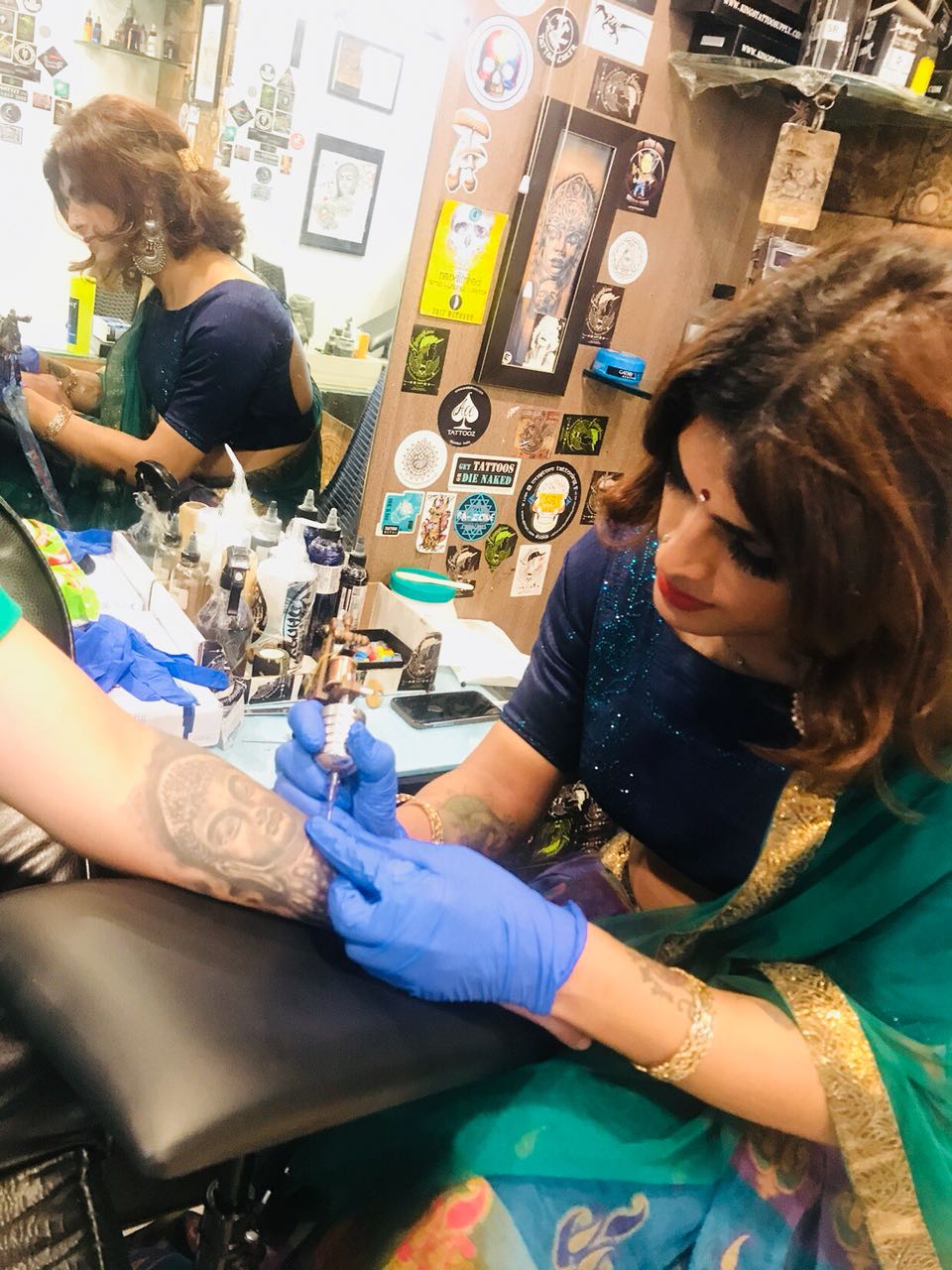 “In school, one of my teachers noticed my skills and provided me with the materials initially. I used to paint the charts that were used in the classes to explain subject matters. I even started earning a little by doing such projects. After passing out from school, I came to Bangalore to study animation in college here.”

However, Nithu wasn’t happy sitting in front of a computer and animating the whole day, where the credits for the final product would mostly go to the company and not her. She also didn’t want to lose her knack towards fine arts. “I know I am good at arts. And I wanted to utilize this talent of mine to the fullest. What really pulled me towards tattooing is that it’s permanent. My art would be forever and I will be remembered by its permanence. And it’s not only that. Even the person who gets a tattoo from me, will always remember me. And with tattooing, my art will be visible to so many more people.” 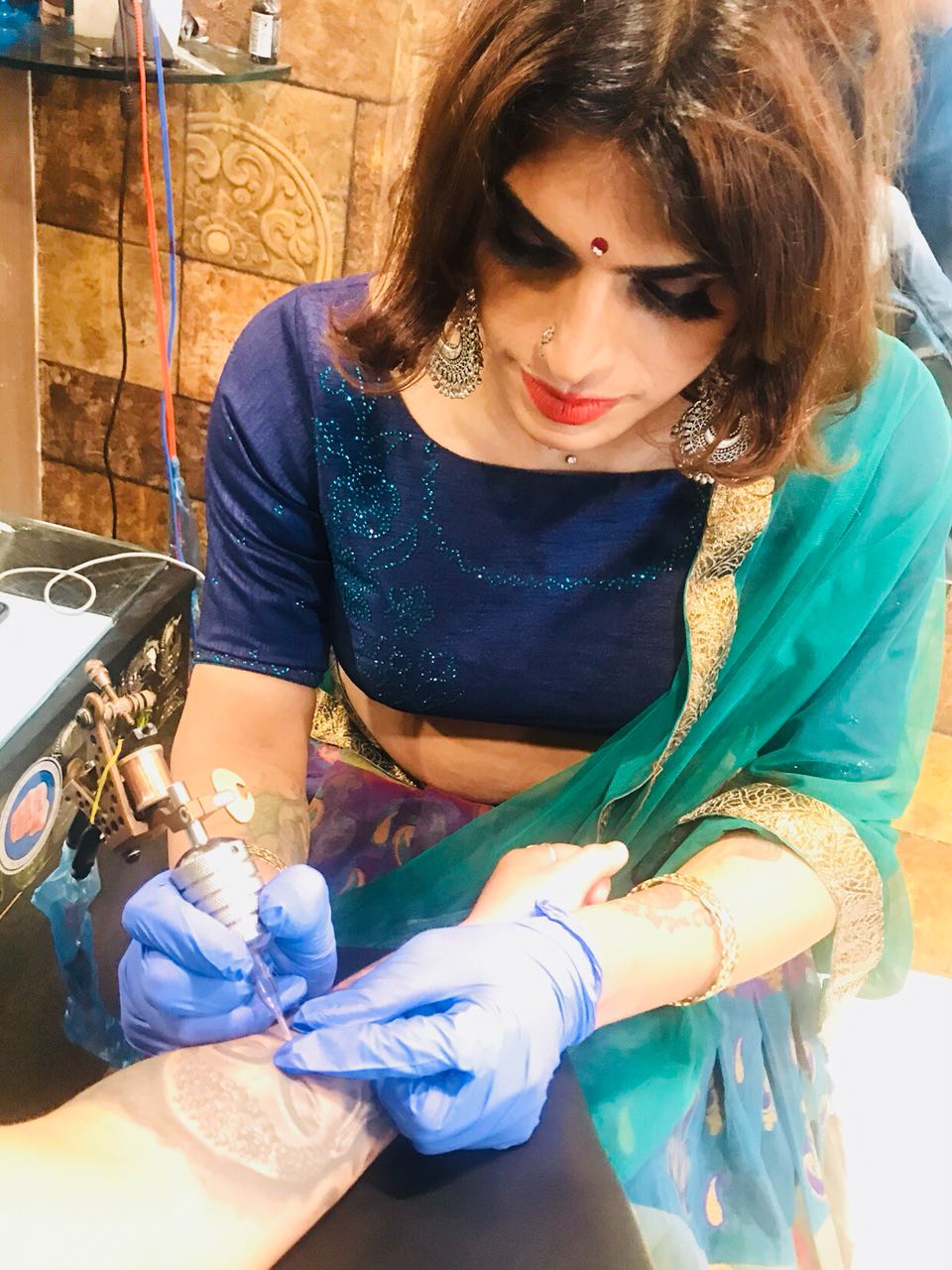 Nithu has six tattoos on her, out of which, four she did herself. Her love for art and her formal training also helped Nithu in honing her skills as a tattoo artist. With a keen interest towards realism work, Nithu still sketches live studies. And she takes pride in the fact that she is the first transgender tattoo artist of the country. She opened her first tattoo studio 4 years back, under the name Tit for Tattoo.

Living in a society where various layers of taboos exist, Nithu finally came out to her family and the world last year during a beauty pageant. She had taken her sister to a few gay parties to introduce her to her world. But because she used to look like a man, her sister thought Nithin was gay and seemed to be slightly ok with the idea.

At one of the transgender parties which Nithu was attending, someone informed her about an upcoming transgender beauty pageant, suggesting she should participate.

“Initially I was excited about it, but then the doubts started coming back. I was always so scared thinking what if the society finds out about me and judges me negatively? But then I had to be true to myself and this platform was well respected. So after going through some dilemma for a few days, I decided that I would participate and come out to the world finally.”

While preparing for the pageant, Nithu told her sister the truth. Her sister was clearly upset and it seemed like it was too much for her, even though she had been ok with the idea of Nithin being gay. “A close friend of mine met her and tried to convince her. He said ‘As a boy, he has done so much for the family. Now let him live his life.’ It took some time, but we managed to make both my sister and mother understand and accept me as Nithu.”

Since her mother wasn’t aware, she initially thought that Nithu would now acquire the characteristics of Eunuchs who beg on the streets. But her brother was very supportive and helped their mother see and understand the facts.

“My brother turned around and said it’s his life, let him be. I didn’t know that my family will support me so much. If I knew that, I would have opened up to them much earlier. All the concerns that used to trouble me earlier are gone now. Everything is fine.”

Nithu was crowned Miss Transgender Diamond, Bangalore 2017 and with the win, Nithin came out to the world as Nithu, for everyone. She has had her surgeries and doesn’t hide who she is anymore. Even though sometimes she still wears unisex clothes when she has to deal with the workers at the restaurant. 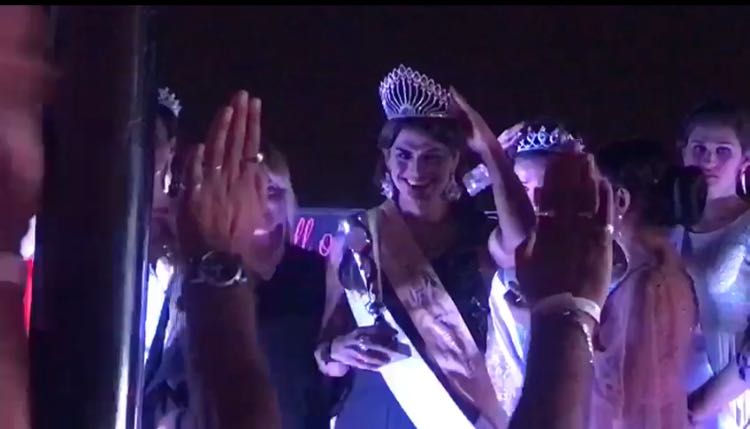 “No one around me judged me or questioned me when I came out because they all have seen me as a successful business owner. But at times, I have to be a bit tactical. I have to keep in mind that not everyone has the education and the awareness to know that being this way is normal. I have long hair, I don’t have facial hair, so people know obviously.”

Coming out to her family and the world, going through the struggles and the confusion for years about her gender identity and understanding the importance of support and awareness, Nithu wants to be a role model.

“I want people to know my story. There are so many talented people around us. And everyone can do a lot with their lives. You should be yourself all the time. Some people will see you in a unique way, while others will judge you. So all that matters is that you should be happy at the end of it.”

Nithu will be now traveling to Netherlands, to participate in an International transgender beauty pageant, representing India.